By Alyssa Melanie on December 6, 2014 Deals
This post may contain affiliate links for which I may receive some commission. This does not change the price of the product. 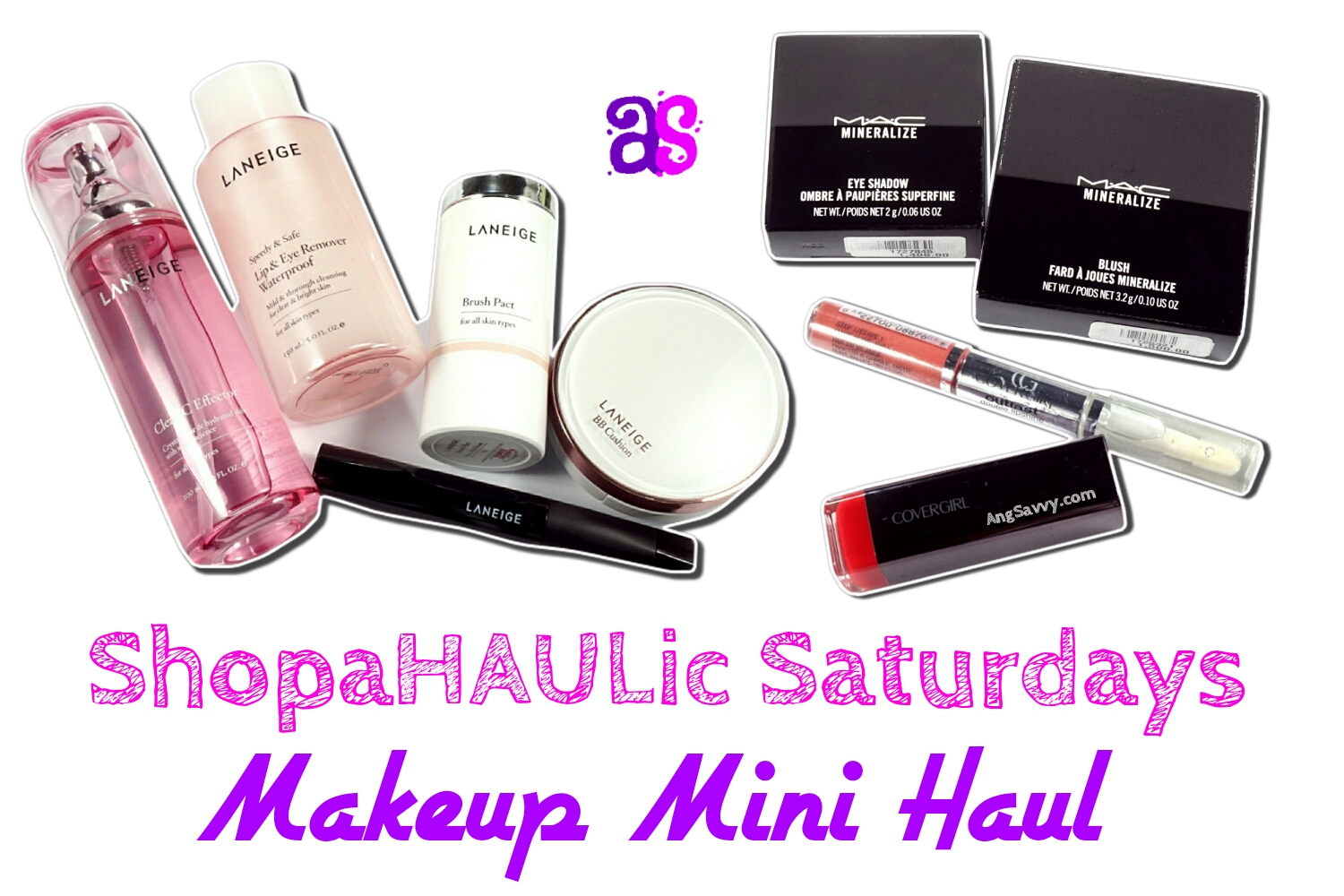 Happy ShopaHAULic Saturday! It’s only 19 days before Christmas, so you’d better finish shopping for gifts to beat the Holiday rush. But then again, sometimes it’s fun to join the chaos that is Christmas shopping a day before the actual holiday. What I don’t like is, when I get to the cashier, there is already a long queue of people trying to pay for their purchases.

The first items that I bought for my Makeup Mini Haul this week are for my December 2014 Giveaway, but I will not list them here so as not to be a spoiler. Lol! I’ll post it soon, so watch out for it. 😉 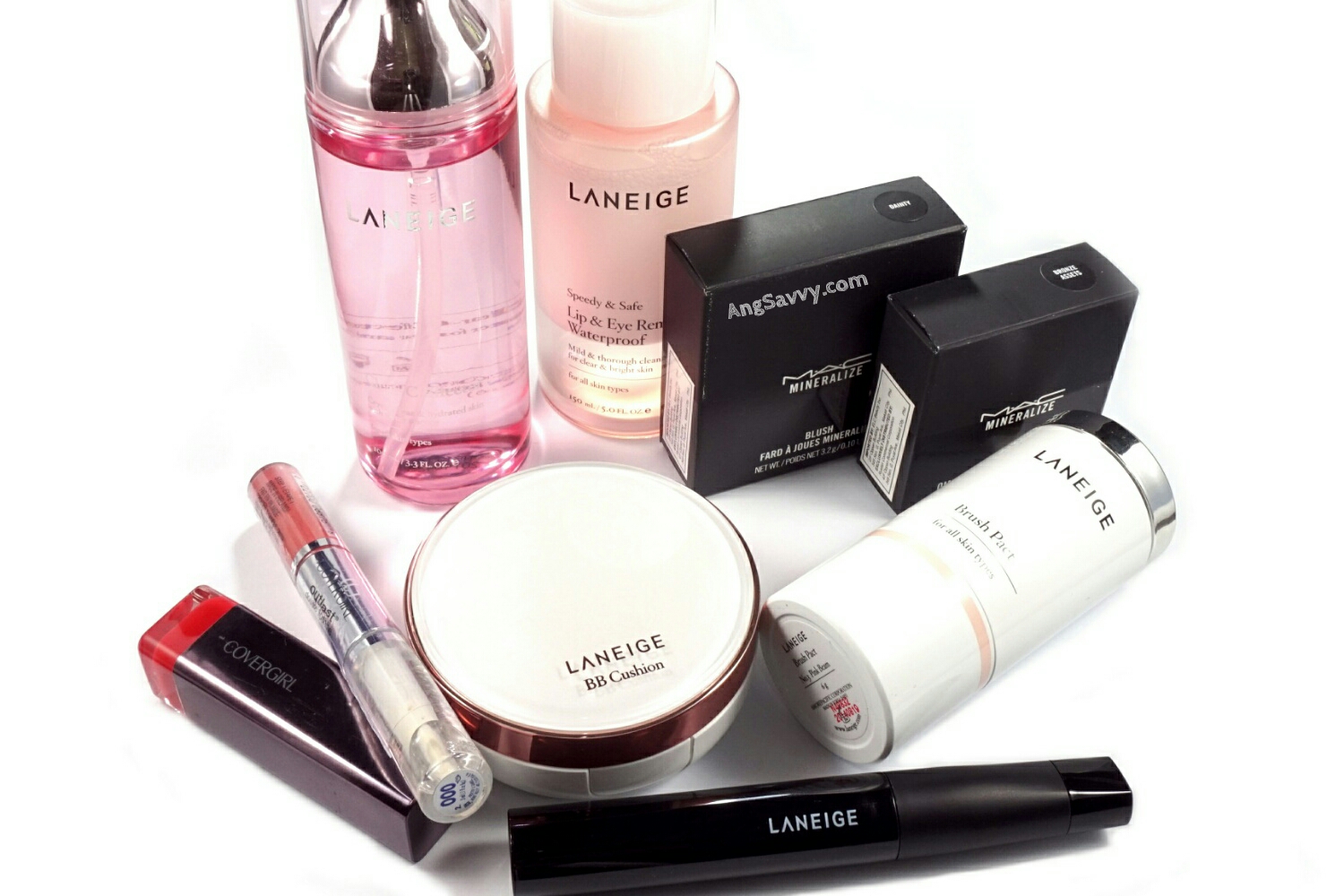 I went to the MAC store to check if they still have the lipglasses from the Heirloom Mix Collection. No luck in that department, though. They were all sold out except for one which I don’t really like. Since I was already there, I checked if they have a stock of Dainty Mineralize Blush which I’ve been wanting to buy for quite some time already. They do! Hurrah! Without hesitation, I told the SA that I’ll be purchasing it. I’m so excited to try this blush, and I firmly believe that I’ll not be disappointed with it. At Php1,500, it costs a little bit more than regular MAC blushes. 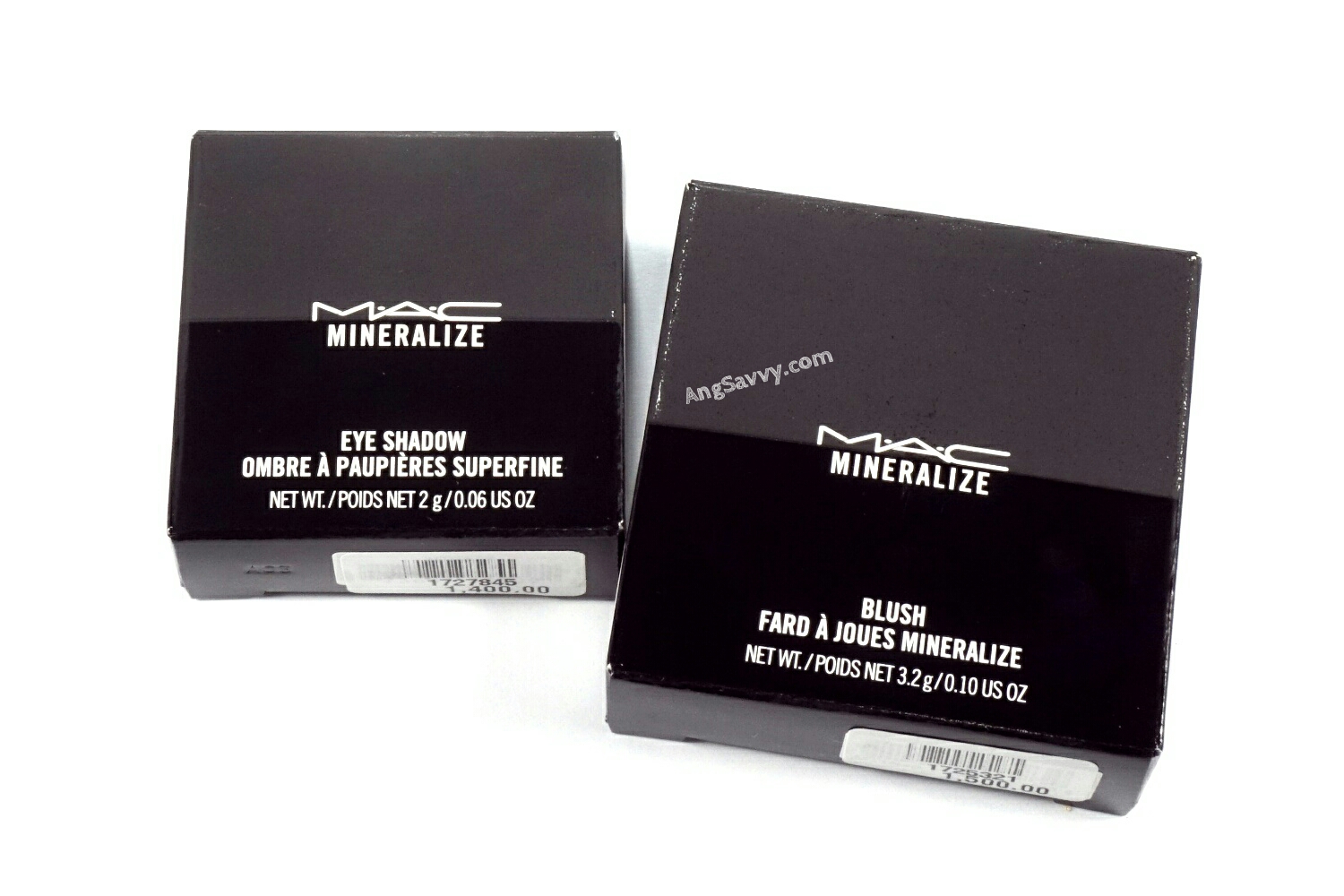 The SA at MAC asked me if I’ve already tried their Mineralize Eyeshadows, and I told her, Yes, I have. But that was years ago. I have tried both In the Groove and Blue My Mind Mineralize Eyeshadow Trio. Back then, though, I didn’t really know how to apply eyeshadows. I just loved collecting MAC eyeshadows, especially their regular-sized ones, because they looked so cute. After more than a year of collecting, I stopped buying eyeshadows because my dresser was becoming cluttered with them and they were just collecting dust. Lately, though, I’ve been using eyeshadows again, although not too much because my eye area is still super sensitive. But when the SA offered to show me their Mineralize eyeshadows, I thought, why not? I only bought one, the Bronze Assets quad. It costs Php1,400, but it’s not so bad when you get 4 colors. 😉 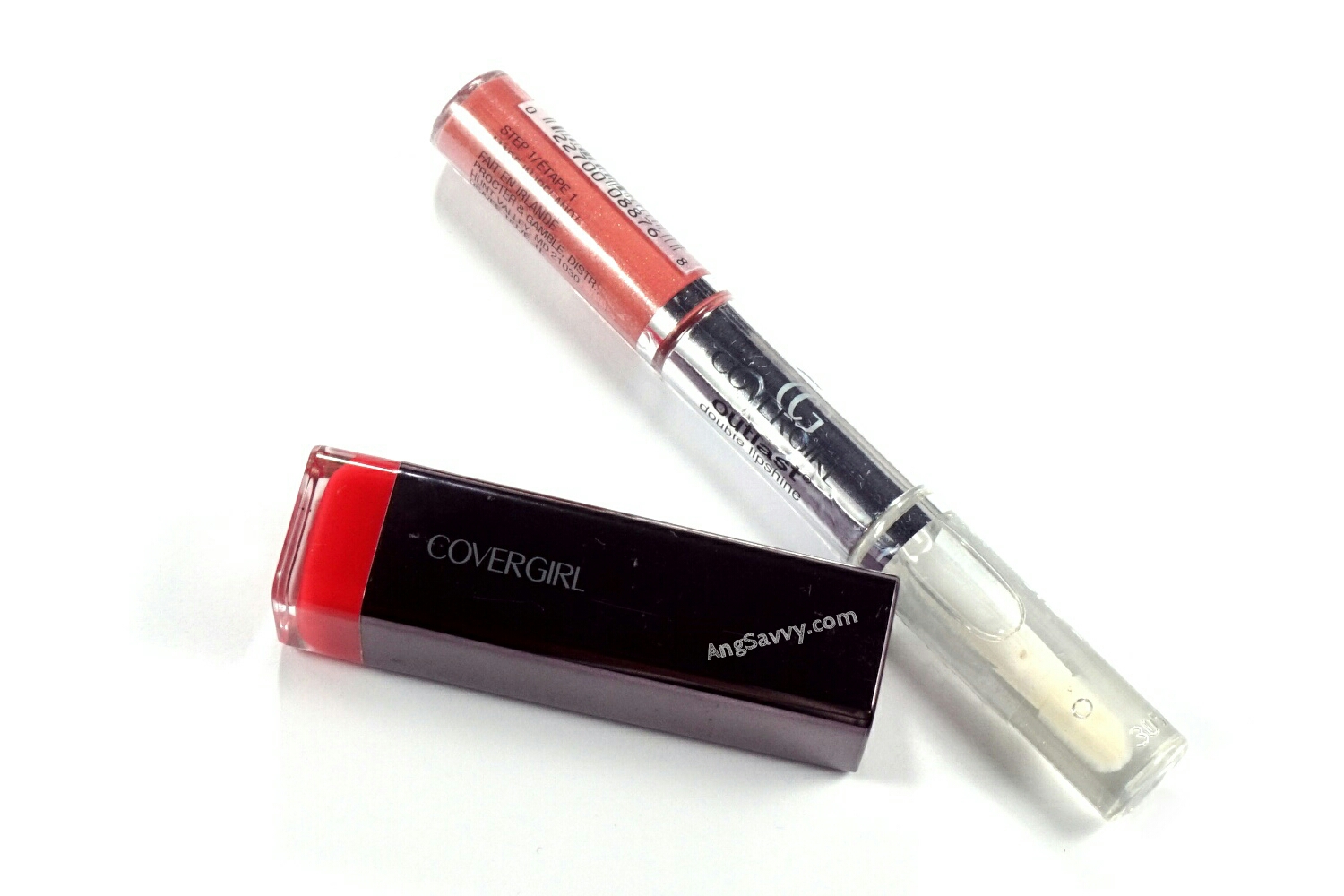 I have heard so much about Covergirl, especially their Outlast line, but haven’t really tried any of their products yet. So, to try out Covergirl, I bought Sahara (305) Outlast Double Lipshine and Flame (300) from the Lip Perfection Lipstick line. 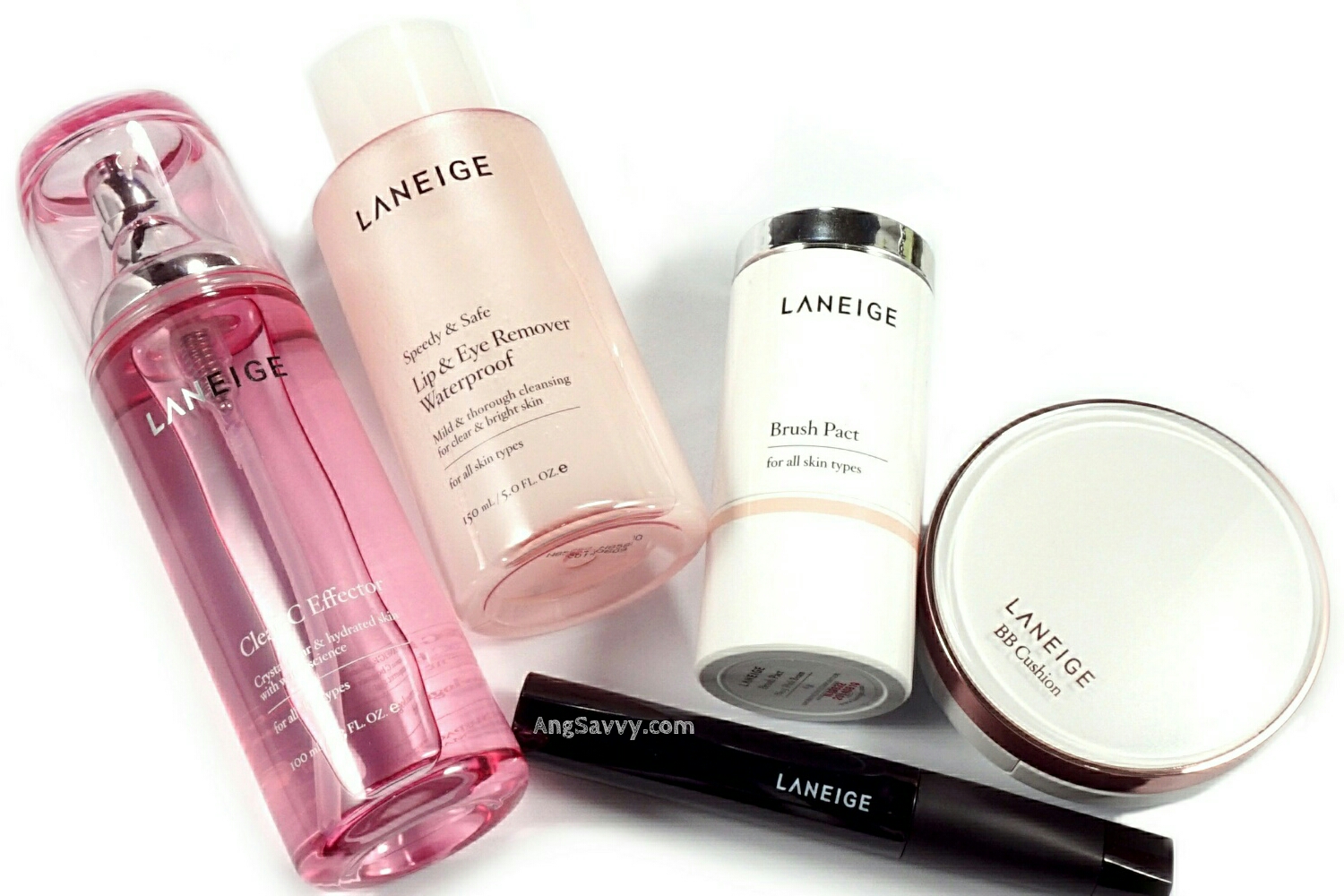 My favorite BB Cushion is this one from Laneige. This is probably the 5th time I’ve purchased a BB Cushion from Laneige, and I like the packaging of this one. In time for the holidays, Laneige had re-released their permanent BB Cushion in Sparkling Party packaging. It looks more classy with the gold rim accent When compared to the pure white casing of the Laneige Snow BB Soothing Cushion, this one is more classy because it has a gold rim accent. I love that the BB Cushions always come with a free refill and a replacement puff. I bought it in shade No. 13 True Beige for Php1,950 from the Laneige kiosk in Robinson’s Manila. I also bought additional puffs which cost Php165 for a pack of 2.

The Laneige Brush Pact is a new release here in Manila. There are 2 other shades available, No. 1 Natural Finishing and No. 2 Pore Blur. I bought the shade No. 3 Pink Beam because I want to use it as a highlighter. It’s also partly because it was what Cat Koh (Laneige Global makeup artist) used on the model in the Laneige Sparkling Party Collection launch. 🙂 The Laneige Brush Pact costs Php1,500 and I also bought it from the Laneige kiosk in Robinson’s Manila.

I had always been intrigued with Laneige’s mascaras, but had not been able to try them out before. I was glad that the SA recommended it to me, so I can finally try it now. It sells for Php1,300 which is cheaper than Chanel and Dior mascaras.

For the past year or so, I’ve been using L’Oreal Dermo-Expertise Gentle Lip and Eye Makeup Remover. It does a fairly good job with removing my eye makeup. When it comes to the lips, though, it stings a bit, and kind of dries my lips. I didn’t want to buy one from Chanel because it’s too pricey for a makeup remover. So, I bought this one from Laneige hoping that it will do a better job than the L’Oreal I’ve been using. It should do a better job, because I bought it for Php850 which is more than twice the amount of the one from L’Oreal.

I don’t have much to say about this product yet, because it had just been recommended to me by the Laneige Brand Manager during the Sparkling Party Collection Launch. I just hope that it will be an effective product that will not break me out. I bought it for Php1,650 also from the Laneige Kiosk. 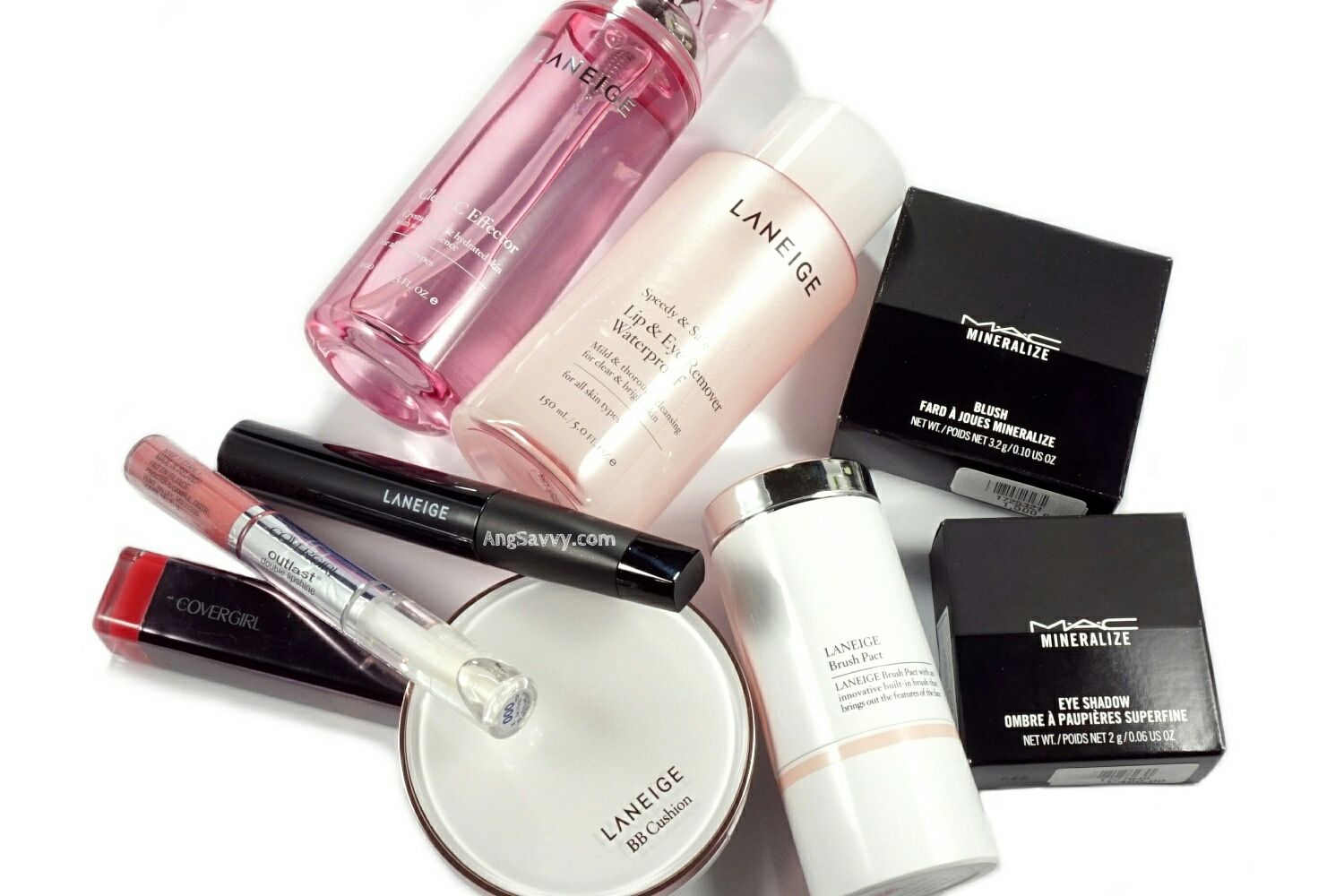 This rounds up my Makeup Mini Haul this week, and I will try to review each of these products in the coming days or weeks. How about you? Have you been doing your Holiday shopping already? Have a wonderful ShopaHAULic Saturday and have fun shopping for your makeup haul, too!